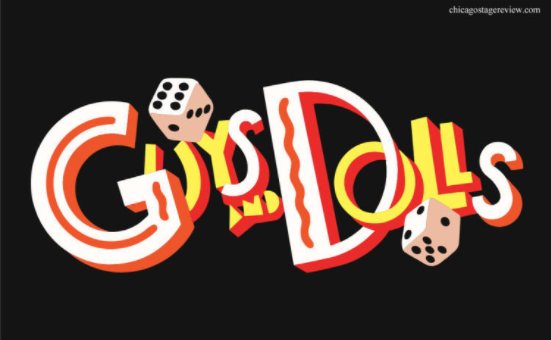 All About Guys And Dolls

At 7pm on Saturday, March 3rd and Sunday, March 4th, the stage of FMS came alive. 6th, 7th and 8th graders sang, danced, acted and had a great time onstage. After many rehearsals, Guys and Dolls was finally put into action. The show went on for about 3 hours and was a great experience for the audience and the cast. Guys and Dolls is a show about gambling, romances, and life in the 1950’s. The main characters were Sky, Sarah, Adelaide, and Nathan. Many teachers, volunteers, and students put a lot of work into the production, and it was flawless!

Guys and Dolls, cool name but what was the show about? The main plot of the show involved Sky and Nathan finding love, and Nathan trying to persist with his crap game. When Nathan realizes he does not have enough money to hold a gambling game called craps, he thinks of people that would be willing to give him money to host the game. Eventually he makes a bet with a character named Sky. The bet was that if Sky could find a girl to fly with him to Havana, Nathan would give Sky money, if not Sky would give Nathan money. Sky goes to the missionary and falls in love with a girl named Sarah. Meanwhile, Nathan’s fiance Adelaide does not support Nathan holding craps and tells him that if he sets up a game of craps again she won’t marry him. Sky convinces Sarah to go to Havana. Sarah thinks she should not be in love with “a gambler”, and Adelaide is mad because Nathan held a game of craps. Things start going downhill for both romances. In the end, after several events, Sky and Sarah and Nathan and Adelaide’s relationships are restored and they become couples.

After the show, many people were awed. I was able to interview several audience members about their thoughts on the show. Elise Henrichs, a 6th grader in House 2, said “It was really good, I was surprised at how good it was. The actors were great, and the props were really awesome”. Jordan Dickman, a 7th grader in House 3, thought, “I liked the plot because it was funny and there was actual suspense in it”. Katelyn Morgan, an 8th grader in House 3, said this about the performance, “I thought it was very funny and the humor aspect of it was played out very well. I saw the effort that the actors and actresses put into the play, and it was very evident that there was a lot of talented students”.  These were the thoughts of FMS viewers, but what did the co-director think about the play?

To find out more about this great play, I interviewed the co-director of the play, 6th grade cross-housed Spanish teacher, Mrs.Molinaro.

Haven: What is your favorite scene in the play?

Mrs. Molinaro: I really like, the crapshooters dance, and “Sit down you’re rocking the boat”.

H: As a director what are your proud of?

M: I am proud of how far the cast and crew have come since November and how much pride

they take in their performances.

H: What do you think is the crew’s biggest accomplishment?

M: Crew made some really nice sets, and they’ve worked really hard on moving those sets and creating props for the cast. I would also say that the kids in the crew have also helped with costumes, lighting, and helped create the cover for the playbill.

H: What have you seen that has improved from day one up to the performance in the play?

M: The students are much more confident, and their artistic talent is really evident on the stage. Also, the kids are really starting to become the characters.

H: Why did you choose to do Guys and Dolls?

M: Mrs. Montague, felt that there were a lot of really great parts for some male characters, and it’s a very different show than what we have done in the past, so we thought it would be fun to try something new.

H: How do you think kids benefit from doing play?

M: I feel that kids form really great relationships with 6th, 7th and 8th graders, and it’s a great outlet for kids that don’t do sports or a club, it gives them an opportunity to show off their talent.

H: Who are some important adults that you think had a big role in the play becoming what it is?

M: Mrs.Montague, the rest of the directors, the parents, former students, and Mr. Baldanzi.

H: How do people join play next year?

M: There will be an informational meeting around November, and students can sign up on the school website. Stay tuned for more information in the upcoming school year.

That was Mrs.Molinaro’s thoughts on the play! But what does the cast think, the students who made the play happen along with the crew?

To find out more behind the scenes about the play, I interviewed multiple cast members. Stephanie Morgan, sightseer, shared this memory, “I remember when we were all squished onstage trying to take a cast and crew photo.” Natalia Murillo, bachelorette, said the hardest part of the play was, “remembering your lines.”  Sofia Letta, mission belle, said one fun thing about the play was that, “You made a lot of friends with people of all grades.” Grace Manobianca, sightseer, commented about the effort from students, “The crew worked really hard, and the cast were dedicated to the play becoming it’s best.”

Overall, the play was great! I, along with many other adults and kids, am looking forward to next year’s amazing production. If you are interested in joining the play next year, there will be announcements, and you can sign up on the school website. We thank everyone who shared their thoughts. Congrats to the cast and crew of Guys and Dolls!