Killer Robots: Better Than You Think 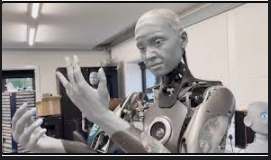 Zap. Killing machines are on the prowl, hunting across farmland and destroying their victims with a laser. Once the robot has identified its target, it locks on and bam. Luckily, three killer robots in England have no such intention — even though they actually do zap things with lasers. Instead, we humans have created these killer robots to aid in our benefit. What do these evil(?) robots kill? Weeds.

These robots — named Tom, Dick, and Harry — were created by the robotics organization Small Robot Company. Another company, Carbon Robotics, has created the Autonomous LaserWeeder, which does something quite similar to the British robots.

Small Robot Company has been working on its robots since 2017, and on January 17, 2022, the organization launched Tom for commercialization. Dick and Harry, the other two models, are currently undergoing testing.

Tom, Dick, and Harry are a team. Tom first scans the growing area, searching out weeds and collecting data. Tom can scan 49 acres a day! Next, Dick is the ‘crop care’ robot, who then zaps the weed with a lazer – which kills the weed. Finally, Harry plants seeds in the prepped land, ensuring that the new plants growing in the field will grow without having to battle weeds. Small Robot Company wants to publicize their robots by 2023, and they are currently working on trying to get the robots ready for mass production.

The lasers zap the weed with a laser, which sends a current of electricity down to the roots of the weed, and back to the tip of the leaves. This ensures that the weeds are completely destroyed. Unfortunately, the robots aren’t as fast as weed-spraying an entire field of crops. On the bright side, the robots will be able to attack specific weeds that are targeting the crop fields.

One agricultural engineering lecturer, Kit Franklin from Harper Adams University said, “There is no doubt in my mind that the electrical system works,” he tells CNN Business. “But you can cover hundreds of hectares a day with a large-scale sprayer … If we want to go into this really precise weed killing system, we have to realize that there is an output reduction that is very hard to overcome.”

He believes that the system will be successful, but it may not be able to kill weeds like a large-scale sprayer would. He thinks that it’s going to be difficult to have the robots kill weeds as much as a sprayer. We just have to wait and see if there’s good hope for a robotic, weed-killing future.

Whether we’ll keep using spray-weed killers, or whether we’ll start using commercialized weed killers, weeds of the world, look out. Laser-emitting killer robots are definitely not going away!