Make sure to read Chapter 1 before reading this! Find it under the name ‘Tara Gumpper’ in the staff section of the Falcon Press website!

Don’t do that. I scolded myself. The recycling plant isn’t safe. If we wake up too late, then whoever works here will discover us. Forget about it.

I closed my eyes and sighed. Only a couple hours ago, everything was perfect. Now my life was all messed up, and I had lost everything dear to me.

I looked back at Meia, and my eyes were drawn to where she was looking. I could tell she was staring at the large flames consuming our house.

She turned around, tears filling her eyes. “We can’t stay here, but I need to sleep. I’m super tired. It’s exhausting to run away.”

My school was right next to the wall surrounding the town. The wall was put up only a couple months ago, probably when the popularity of my parents’ project began to increase. The wall was way too high to jump over, and it was made of bricks. Nobody could climb bricks. But outside the wall, there was only a vast expanse of nothingness.

A plan started forming in my head. “Meia,” I started slowly. “We could sleep outside the wall.”

“Outside the wall?” Meia’s face paled. “That’s too far! And the soldiers will most definitely catch us by then!

The recycling plant was pretty much in the center of town, and I knew Meia was already tired, but it was the only safe place! 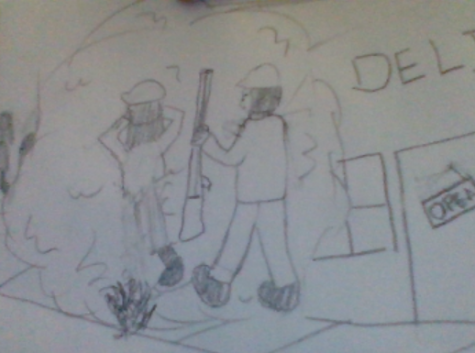 “Meia, we have to. It’s the only place we can rest safely! Can you create smoke bombs?”

“Alright.” She groaned. “But I can’t carry Jenny. She’s too heavy.”

“Oh my gosh.” I whispered. “You have Jenny! Meia, how could you have Jenny? We brought her to the shelter months ago!”

Jenny was the tiny, gray kitten we had found under our steps, the day of the largest hurricane of the century. She was frail, and missing fur. She was also limping, as one of her feet had gotten frostbite.

We returned her to the shelter after the storm, where they brought her back to good health.

“Last night, I heard sounds under my bed. I looked under there and saw Jenny! She must have come back for us. I’m sorry.” Meia confessed.

“I love Jenny,” I said. “But we need food and water for her! We have to return her to the shelter.”

“And risk getting caught?” Meia said defiantly. “No.”

I sighed. There was no point arguing with Meia. I had to take care of my sister and couldn’t  have her dislike me.

“Alright, we’ll keep Jenny. But it’s going to be hard. We may need to drop her off at a city along the way to America. We only have enough rice for a week, and we don’t even have that much water.”

“Thank you, Kara.” Meia said gratefully. I could tell she cared for the kitten a lot.

I put Jenny into my knapsack gently. She growled softly, probably disturbed that I just put her in a bag, but it would be the best solution for now.

We started through the town, trying to avoid soldiers. We ducked behind small huts and large hotels. We walked behind stores and ran through alleyways.

Suddenly, I heard a harsh command coming from behind us. I quickly glanced around, and there was a soldier!

“Meia, release the secret weapons.” I commanded her.

Meia quickly took out a smoke bomb, and threw it behind her. A wall of opaque white fog exploded in front of the soldier, and my sister and I ran away from him, fast.

I wiped a bead of perspiration from my forehead, and Meia and I continued on towards the wall.

Three soldiers, two smoke bombs and an hour later, we made it to the wall. Now, we had to get over the wall. But there was a problem. The wall had to be at least 20 feet high. But the school was right next to us…

It’s dark out, and it’s a Friday night. I thought to myself. Nobody will be in the school right now — not even the janitors. They must have left long before now.

“Kara?” Meia said gently. “You do know that we have lock picks, right?”

“Oh, yeah.” I said sheepishly. How could I forget about the lock picks? I taught myself how to pick locks when I was little. “We have to get up to the second floor, get into the Janitor’s closet, and get onto the roof. Then we have to jump five feet to get to the top of the wall.”

“Hold on.” Meia said. “I don’t even go to this school. I’m in the elementary school on the other side of town. I’ve never even been in this building before! You lead the way.”

“Alright,” Meia said uncertainly. “As long as we don’t get caught.”

“I know we won’t get caught.” Even though I had only just said that, I didn’t feel so sure about it.

I had taken the bobby pins out of Meia’s hair, and picked the lock to the school. I locked the door behind me, so that nobody would know we got  in. Within minutes, we had navigated through the classrooms, up the stairs, and into the second level janitor’s closet. Then, Meia opened the window, and we were out on the roof.

“Will I fall off?” Meia asked begrudgingly. I knew she didn’t like this.

“No,” I said. “The wall was designed so that there was ten feet of brick. That way, nobody could drill through it without unintentionally alerting the police. It’s definitely large enough to stand on.”

After giving Meia a leg up, which I must say she completely disliked, I jumped as high as I could, and Meia, only because she had to, tightly grasped my hands. 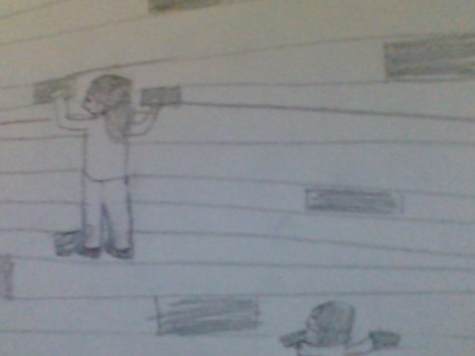 Meia hoisted me up only a bit more, and I walked up the wall with my feet. Eventually, we were both on the top of the wall.

“What is it?” I asked, a bit worriedly. I didn’t want it to be soldiers waiting on the other side.

“There are some bricks missing!” She said happily. “We can use those as footholds and climb down!”

I smiled joyfully. There was a lake only a bit further down the wall; I had been there on a school field trip. I was going to tell Meia to jump into the lake and swim out, but the footholds were a much nicer escape.

“Yes!” I whispered silently under my breath. I had just remembered that our uncle had built the section of wall behind the school. He must have heard from my parents somehow that we were in danger from the government, so he may have tried to help us by providing a way to escape.

Meia and I climbed down carefully, and were finally safe. A forest blanketed the land around us.

“If we go into the forest, we will be safe to rest.” I said.

Meia smiled. “Thank you.” She said.

“For helping me escape.”

Meia and I walked a little further into the forest, and I picked a nice, shady spot. Meia cleared away the twigs and leaves, while I laid down the pillows and blankets.

“Where will Jenny sleep?” Meia asked.

“She’ll be safe in the bag. I took Jenny’s head out, so the knapsack will be like a sleeping bag.” I said.

“But the bag will be out in the open!” Meia frowned.

“Alright, I’ll put it under the blanket for you.”

“Good night.” I replied. I settled down to read a chapter of A Wrinkle In Time, and crossed out a day in my calendar. Soon, I was deep into a nice, peaceful sleep.

Until a gruff voice shouted, “Who are you? Wake up! Get out of here!”

Chapter 3 is coming soon! Look out for it under the name ‘Tara Gumpper’ in the Staff section of the Falcon Press Website!