What’s the Current Status of the ERA? 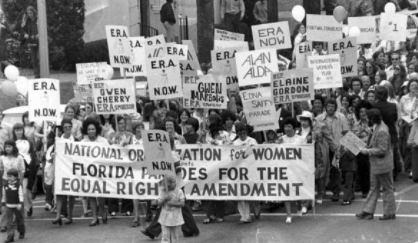 In the constitution, there are 27 amendments, one of which is the Equal Rights Amendment. The idea was first proposed by two women in 1923 but wasn’t approved by Congress until years later in 1972. The proposal asked for “equality of rights under the law shall not be denied or abridged by the United States or any State on account of sex”. A requirement for the amendment to become a law stated that ⅔ (75%) of the US needed to ratify it. The deadline to ratify was set to 1979, but only 35 states had ratified it out of the 38 that was required. The deadline was later changed to 1982 for more states to ratify the amendment, but sadly, no state decided to ratify it within the extension.

Back in the 1920s, there were plenty of things that made a difference between men’s and women’s lifestyles. Many women were denied common freedoms and many women didn’t work besides around the house. Another factor about how different both lifestyles were was women thought they already had equal rights: they thought it was a norm for women to stay at home and for men to work and earn money, which happened because it was true at the time.

The fulfillment of equal rights took many decades, and still, in this generation, some ways demonstrate unequal rights. However, that doesn’t mean that throughout history, we haven’t made any progress on rights, but that it’s not fully equal yet. As time goes on, women are gaining more and more rights that men have.