The Falcon Press • May 11, 2021 • https://fmsfalconpress.org/2790/world-national-news/zoos-around-the-world-the-surabaya-zoo/

Zoos around the world: The Surabaya Zoo 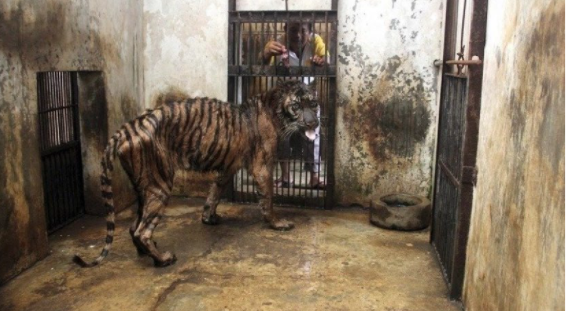 The Surabaya Zoo has been running for years since April 1918. Located in Indonesia, it has been known for its traumatizing environment for the animals as well as scandals. These issues have been well-documented on social media. The Surabaya Zoo has been hurting, abusing, and mistreating its animals. To support this claim, there have been many photos and videos of the zookeepers abusing the animals.  However, this zoo continues to stay open to this day with no threat to close it down, even after all the damage it has done to those poor animals, which were supposed to have a great life there. If you compare the Surabaya Zoo to American zoos, it is totally different.

The Surabaya Zoo has not only traumatized the animals with their hurtful actions, they have starved them, rarely groom, or even bathe them. They are in unkept enclosures that don’t even look close to be considered a good habitat. They are supposed to be in enclosures that should look like their real habitat. But instead the animals are in cages without space and freedom to do anything. These issues result in the animals getting depressed, more than likely with premature death, just because of this harmful environment. There was actually a report with a photograph all over social media and the news saying that in 2019, one of the lions possibly killed itself

because of its depression but it is unclear whether the zoo keepers killed it. There is other evidence, such as the picture here, that shows an example of how unhygienic the tiger enclosure is, and how malnourished the tiger is. Despite the widely publicized nature of the zoo’s abuse that is still occurring today, the zoo has not yet been held accountable.

American zoos and the Surabaya Zoo are very different. When people visit an American zoo, healthy animals are in good shape, roaming, are clean, and looking healthy. But then imagine going to the Surabaya Zoo, seeing animals malnourished, skinny, dirty and not moving. You would probably be traumatized and feel upset for those poor, mistreated animals, living in such a horrible environment. But when visitors go to American zoos, they feel happy and excited, seeing the animals running and rolling around the grass and being able to interact with the animals causes excitement. And just overall have fun but not Surabaya.

What can be done?

Although the Surabaya Zoo has not been held accountable for its terrible behavior, there are ways to encourage change. First, help save the animals’ lives by signing petitions, such as this one. It helps top officials and investigators to raise enough money to save the poor zoo animals and get them into improved good care to recover. Please do your part and share with your family and friends about the Surabaya Zoo, and sign the petition!