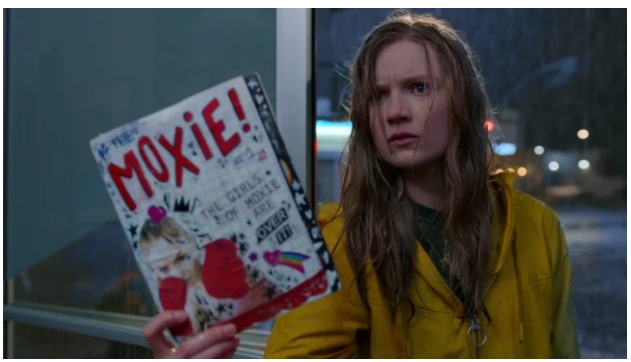 Recently, the movie “Moxie” was released on Netflix. A summary by npr.com states, “It’s a story about Vivian (Hadley Robinson), a 16-year-old girl trying out the idea of a political self for the first time via a feminist zine (the titular Moxie) that she secretly begins publishing and stacking up on top of the hand dryers in the school bathrooms. The zine leads to the formation of a Moxie club, and then to something of a movement. It’s also a story about Vivian as the child of a single mom (played by Poehler), and how she struggles with her mom’s desire to date. And there’s more! Vivian is getting involved with her first boyfriend, Seth (Nico Haraga), a guy who knows about and digs her secret work. She’s having some growing pains with her longtime best friend Claudia (Lauren Tsai), in part because she’s making a bunch of new Moxie friends including Lucy (Alycia Pascual-Peña), whose boldness in standing up to jerks is part of what gets Vivian going in the first place.” While the movie was okay, I didn’t love it. I will explain my thoughts on it.

First off, I wasn’t a fan of the fact that there were so few riot grrrl songs in a riot grrrl movie. Like, hearing some Bikini Kill in a mainstream Netflix movie was super cool, but if it were me, the whole soundtrack would have been classic and new riot grrrl, and not just Bikini Kill. Also, if it were me making it, the straight, white, cisgender, upper-middle-class girl definitely would not have been the main character, especially since this is one of the things riot grrrl has been so heavily criticized for since its birth. I like that there were POC and queer characters, but seeing one of them as the lead would have been nice and less repetitive, and definitely a good step towards putting people oppressed and excluded by riot grrrl in the past at the forefront of it. However, I do like the fact that I did not hear any “radical feminism” (terfs) or terf rhetoric throughout the film (unless I missed something), especially since there was a trans character. I was worried about that when going into it. (Friendly reminder that reducing the identity of a woman to their anatomy is super terf-y and literally doing the same thing the patriarchy does- boiling women down to just that!! Don’t do that.)

Overall, the movie was fun to watch and I enjoyed it, but I don’t think it was the best representation of riot grrrl culture. It might have been good movie, but maybe not the best “riot grrrl movie” if that makes sense. I do think it’ll probably get a lot of young people into riot grrrl which is cool!! To sum it up, I would probably give it a rating of 3 out of 5. 🙂