The Falcon Press • May 11, 2021 • https://fmsfalconpress.org/2717/science-technology/can-colors-change-your-attitude/

Can Colors Change Your Attitude?

All different colors symbolize different things. For example, blue usually means the ocean or the sky. Green can represent nature and the natural world. Pink means romance, and not only that, but it has some strange effects on the human body. It makes you less aggressive towards other objects, and people.

The specific color of pink that makes people act differently is Baker-Miller Pink. This color can also be known as “Pepto Bismol Pink”, or “Barbie Pink.” If exposed to this shade of pink for long enough, aggressive people can become calm. It seems impossible to be hostile or aggressive in the presence of this shade of pink. So how were the effects of this strange color of pink discovered?
The color itself was made by a man n

amed Alexander Schauss, and he wanted to know if people reacted differently in the presence of this color. “In 1979, Schauss managed to convince the directors of a Naval correctional institute in Seattle, Washington, to paint some prison confinement cells pink in order to determine the effects this might have on prisoners. Schauss named the color after the Naval correctional institute directors, Baker and Miller” (Biggs). Clearly, the effects were that the prisoners became less threatening. In another test, they took two strong men and took strength tests, where they had to grab a grip strength, and squeeze it as hard as they could. They then had one person look at a pink card, while the other looked at a blue card for a while. They then had the two men take the test again, and the person who looked at the blue card seemed to be stronger, and the person who looked at the pink card became weaker. This demonstrates 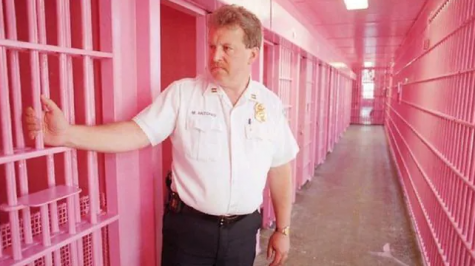 an example of Baker-Miller Pink having the effect of making people weaker. Jails had their cells painted pink, and almost immediately, they began to see effects. Their prisoners became less aggressive towards one another.

According to Schauss himself, “the phenomenon affects the endocrine system, causing a tranquilizing effect on the muscle system,” he writes in his study. “The effect can not be controlled by conscious or unconscious effort.” The endocrine system is what controls how you feel (your mood), among other things. So in a simpler form, when our eyes see Baker-Miller Pink, they send the image to our brain to release hormones causing us to feel this specific emotion and loosen our muscles, and that makes it hard to be aggressive in the presence of this specific color. This color is quite strange and interesting to study. To recap it all, it is hard to be hostile or aggressive in the presence of baker-miller pink. So if you’re ever in the need of someone not to be violent, just put them in a room covered with Baker-Miller pink, and see the effects!

Works Cited
Biggs, Caroline. “This Is the One Color That Can Actually Make You Calmer, According to Scientists”
Unexpected Forces that Shape How We Think, Feel, and Behave