The Falcon Press • May 11, 2021 • https://fmsfalconpress.org/2715/morristown_news/youth-stand-up-for-good-jobs-and-climate-justice/

Youth Stand Up For Good Jobs And Climate Justice 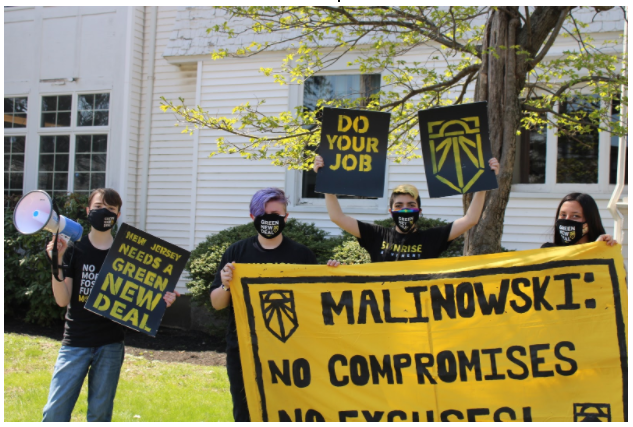 Climate activists with the youth-led organization Sunrise Movement have been increasing the pressure on local Representatives over the last few months. The group has recently launched a new campaign, “Good Jobs For All”, focusing on the Federal Jobs Guarantee, a part of the Green New Deal. On April 7th, four North Jersey Sunrise Movement hubs marched to Rep. Tom Malinowski’s office from a nearby park. The protestors also disrupted a Town Hall that Malinowski had scheduled for during their protest in a thinly veiled attempt to keep the activists from getting attention.

The protest started at Michael Lepp Memorial Park, approximately a mile away from Malinowski’s office. The protestors began marching around 1:30, with two youth leading, holding a banner that read, “Malinowski: No Excuses, No Compromises”. Other signs had slogans such as “NJ Needs Good Jobs” and “Do Your Job”. The youth also sang songs such as the Sunrise Movement’s “Rise Up” as they marched through downtown Somerville. Once at their destination, they set up a computer and tuned into the virtual Town Hall that Rep. Malinowski had scheduled, preparing to disrupt it in order to send a message to the congressman. Activist Rey Watson, a key organizer in the protest, said, “We didn’t want to disrupt his Townhall, but this is a matter of making sure Malinowski knows that he can’t just push us around. If he tries to schedule a Town Hall when he knows we’ll be outside his office, if he stands in the way of the people getting good jobs, then we will continue to fight until he either stands up or steps down.” During the Town Hall, one of the youths from Hunterdon County unmuted and gave a speech asking Tom Malinowski to sign the Good Jobs for All pledge, the activists’ target for the protest. When Malinowski refused, saying that the pledge was too vague, the activists outside the office unmuted and turned their video on, singing the lyrics to the song “Rise Up”. The activists got to the third line, “They try to stop us, but we keep coming back…” before they were forcibly muted, and continued to unmute themselves while they sang “We gonna rise up, rise up till it’s won…” “When the people rise up, the powers come down.” until they were removed from the meeting. They then used several alternate accounts to continue, alternating chants of “Malinowski, sign the pledge!” and “What do we want? Good Jobs! When do we want them? Now!”. Eventually, the meeting hosts were able to stop the youth activists from entering the meeting and the Townhall proceeded. Meanwhile, back at the congressman’s office, the activists got to work covering Rep. Malinowski’s office in signs, stickers, and leaving a manilla folder filled with mock resumes (Filled out as if they were from ten years in the future, and the Federal Jobs Guarantee had been enacted) and a paper copy of the Good Jobs for All pledge for him on the step.

The activists had one demand for Mr. Malinowski: for the congressman to sign their “Good Jobs For All pledge”, which was the same demand as thousands of young activists around the country who also mobilized that day, as part of Sunrise Movement’s “National Day Of Action”. The pledge includes promising to invest $10 trillion to “create millions of union jobs addressing the crises of climate change, economic inequality, and systemic racism….” (Sunrise Movement) Malinowski refused, and 14-year-old Sunrise Movement Morris County activist Miles Gorman (pictured) said on the topic, “The people have spoken. Rep. Malinowski’s job is to act in his constituents’ best interests, and that means getting them good jobs and securing their right to a liveable future. Until he does that, he is failing us.” The pledge is part of the Green New Deal, a congressional resolution introduced by Alexandria Ocasio-Cortez and Ed Markey with a focus on workers, renewable energy, and equality.

The youth-led protest was a sign of the increasing pressure young people are putting on congresspeople to stop climate change. Sunrise Movement, entirely youth-led itself, is becoming more and more active in the Morris county area and the surrounding communities as youth are standing up for their lives. As activist Miles Gorman put it in his speech at the rally, “We are not against you, we are against the destruction of our planet, and with it our chance at a livable future. We are literally fighting for our lives.”