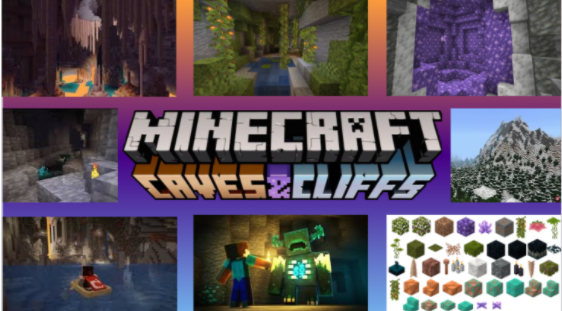 Minecraft is a survival video game created by Markus “Notch” Persson and was initially released in 2009 and was a huge hit right off the bat. But, in 2011, Minecraft 1.0 was released. Since then, an entire decade has flown by and 16 major updates have been added, and one more is coming this summer, 1.17. The previous update, 1.16, gave the Nether Dimension a makeover. Now, coming this summer, the mines and mountains will have their time to shine after years of fans demanding a cave update.

Minecraft has had massive world generation upgrades. A basic house in the first version of Minecraft looked like this: Flat terrain, bland blocks, and no depth (top). Now, your average house looks like this. Bright, beautiful, and stunning terrain (bottom). The terrain was originally flat, but many biomes were added later on. A biome is an area with a specific set of terrain and features such as a jungle or a desert. Over these updates, some biomes were upgraded, such as the ocean. During 1.13, Mojang gave the oceans of Minecraft a makeover adding coral reefs, kelp forests,

dolphins, turtles, and shipwrecks/ruins. The 1.17 update will change the caves and mountains, and the new biomes will be covered here.

Lush Jungles – Lush Jungles will be a new type of cave and will be featuring new blocks like moss and new plants like the dripleaf and glowberries. But the true star… are the axolotls, a new mob that will have different color variants and inhabit these overgrown, mystical caves.

Dripstone Caves – Dripstone Caves are caves that feature dripstone blocks, which if stepped on or dropped upon you, deal a lot of damage. These new blocks could be useful in traps and decoration. Dripstones are the real life equivalent of stalactites and stalagmites

The Deep Dark – Get ready for a wild ride in the Deep Dark caves, because there is a lot to uncover. There is a new section of a world from Y-Axis Level 0 to -64, which was previously unexplorable and was a void. Coordinates are used to demonstrate where you are in your world. The coordinates are measured from the origin of 0,0 like a coordinate grid. This section replaces stone with deepslate (formerly known as grimstone) and if you are unlucky enough to find a cave, you might just come across a Warden. Wardens are the only blind mob and use a block called sculk sensors to figure out where players are. These mobs are very dangerous and do more damage than an Iron Golem! An Iron Golem is a very powerful mob that spawns in villages and protects the village from monsters such as zombies and skeletons.

Spaghetti Caves – A spaghetti cave is the name for a new type of cave generation that is very long and continuous like a piece of spaghetti.

Cheese Caves – Cheese caves are another new cave generation like swiss cheese, in that there are many small holes in a bigger cave.

They will also be upgrading mountains, increasing their height and detail, while adding dangerous powdered snow that could freeze you if you get stuck in it, and mountain goats that can ram you at fast speeds and do knockback. World generation plays a big part in making each and every world unique, and this update will be a massive update and will change the game.

Along with new world generation, new animals and monsters, also known as mobs and new blocks will be added to the game to add to the Minecraft experience. A popular thing Mojang has done the past few updates is hold a mob vote and let the players decide on 1 new mob to

be added to the game. This one was between the Iceologer, the Glow Squid, and the Moobloom. The Glow Squid was the winner and will be added when the update is released. The other mobs being added are goats, the Warden, and axolotls.  A lot of new blocks will be added to add even more spice to a builders palette of blocks. A major new block added will be copper ore and copper blocks. But, copper blocks have a new, unique twist that can be very cool. When you craft a copper block, it will weather over time, just like in real life. Pictured here are the 4 stages of copper, copper ore, and a lightning rod, which can be crafted using copper. But, if you want a specific stage of copper to stay the way you want it, use honeycomb to wax it and prevent it

from rust. Another big addition to this update are bundles. Bundles will be used to manage inventory space by allowing you to put any group of 64 items into 1 bundle, being a newfound necessity and are basically the cheap version of shulker boxes, which are basically mobile chests that you can store in your inventory.

(This section is opinion based)

Every new update obviously brings a lot of excitement to the fans, but sometimes some features of an update will bring disappointment. Using the previous update, a down side was the new Soul Sand Valley biome in the Nether, an infuriating addition. The Nether is a

dimension that you can go to by making a portal out of obsidian. It brought nothing but pain, agony, and having your nether portal being guarded by hundreds of skeletons, not allowing entry or exit. In 1.17 there will be multiple negatives in my opinion. One down side will be the changing of ore textures. This is heartbreaking for many long-term players because many people have gotten to know those ore textures for a while. They even survived a massive texture update in 1.14, but they are being changed. At least they are keeping 1, being diamond. Another possible downside will be if you don’t have an option to choose whether to have these giant

caves and big mountains. If it always happens, then people with smaller, not as powerful devices such as a phone or a tablet, these colossal generations will make the game basically unplayable because of all the many different blocks and mobs it has to load. One final downside will be the large caves. In a way, these will be a huge positive for finding resources and exploration, but for people who love building, it makes it a lot harder to build underground. All in all, there are pros and cons for every update, but most importantly, the pros will outweigh the cons.

Minecraft 1.17 is one of the most wanted updates and will be the biggest of all time. It will be one for the history books and will change the way people play Minecraft forever.

Author’s Note: All information in this article comes from my knowledge and experience in the 12 snapshots that were released as of February 26, 2021. The snapshots are listed below in order of release. If you have Minecraft: Java Edition, and you didn’t check out these snapshots yet, I highly recommend them. They definitely add to the excitement of the release of Minecraft 1.17.