Mafia: Real-Life Among Us 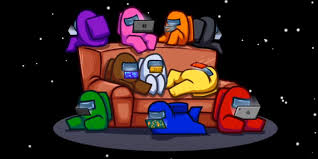 Like Among Us? Here is a real-life game you should know about.

One of the buzziest video games right now is Among Us. Who knew that working with a group of friends to find the imposter in the group could be so fun? Well, back in the day when good old fashioned play was king, a game called Mafia had the same idea!

Did you know that the creator of Among Us, Innersloath, wanted to originally call Among Us, Space Mafia? That is how similar the games are. In both games, lying and being a fake is not only ok, but encouraged and it is also part of the fun.

Like Among Us, in Mafia you gather a bunch of friends and split up into two groups. One group is the Mafia, who are hidden and unknown to the group, and the other group is composed of Villagers. Sound familiar? This is the same concept as in Among Us. Except that in Mafia you are playing with real-life people and not with video figures on a screen.

The game Mafia was created in 1986 by Dimitry Davidoff, a college student and tutor in Russia. He created the game as a fun experiment to test and explore the psychology of his student’s minds. Are you a good liar? What makes you good at this game is your ability to lie, how good you are at reading people, and how observant you are of your surroundings.

At the start of the game, the Mafia learns who their fellow Mafia teammates are, while the Villagers don’t know who is Mafia or who else is a Villager. Some Villagers have special powers and abilities, such as detective, medic, sheriff – to name a few. The players then all go to sleep (not going to bed – sleep!). The Mafia then wakes up and chooses who to kill and then goes back to sleep. Then everybody wakes up and works together to vote off who they think is the Mafia. So the Mafia are imposters who lie about their identity and pretend to work with the villagers but are sabotaging them by impersonating them to avoid being found out. The Villager’s aim is to identify the imposter Mafia members and vote them all off before they become a target themselves.

Now that you know about the original, real-life Among Us, don’t you want to ditch the screens and learn to play it? The great thing about Mafia is that you can play it with real people, so you learn the skills that the creator, Davidoff, intended. How to protect yourself, read people, and read your surroundings. These are skills that are very different in real life versus hiding behind a device. Seems like there is something to learn from our elders……maybe, just maybe.