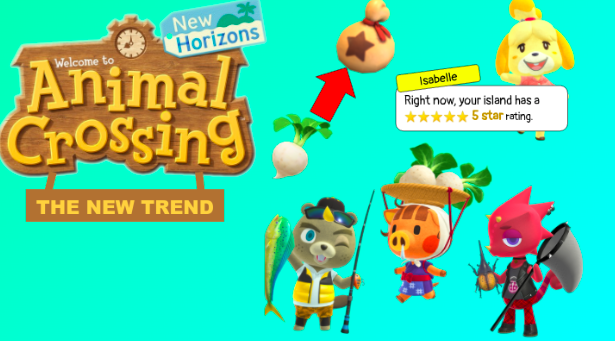 What Is Animal Crossing?

Animal Crossing is a Nintendo game franchise that was first released on April 14th, 2001. The franchise has released a number of games over the years for many different consoles from Nintendo.  Some are the original Animal Crossing, Wild World, City Folk, New Leaf, and New Horizons.  New Horizons was the most anticipated addition to the franchise by the fans. According to Screenrant.com, “…the game delivered the third-biggest launch ever for Nintendo…”  Another factor of anticipation for this new Animal Crossing game is that there was a seven-year gap between the main-series release of New Leaf to New Horizons, but the developers quenched the fans’ thirst with a few spinoff games in the meanwhile such as Happy Home Designer, Pocket Camp, and Amiibo Festival.

The game features 460 unique animal villagers throughout the series, with different appearances, catchphrases, and personalities. The main point in all the games is to have the best and highest-rated town or island. Users can do this by building a variety of infrastructures, having good relationships with the villagers in their towns or islands, catching fish and bugs and donating them to their museums, and by spending their bells (Animal Crossing currency) in stores.  But, even when players do that, there are still so many more things to do!  Players can attempt to gather every furniture item, every DIY recipe, fill up their Critterpedia (the software on your in-game phone that stores data on bugs and fish), and so much more!

Nintendo released Animal Crossing: New Horizons on March 20th, 2020, and this game was a game-changer for the franchise.  This game gives players the most creative freedom, by far.  A new feature is being able to terraform your island, by morphing rivers and cliffs to fit your desires.  You are also now able to place furniture outside freely, and do other things you were restricted to in previous installments in the franchise. A number of new characters were added to New Horizons too!  Flick is a bug obsessed chameleon who lets you sell bugs to him for bells, and CJ, who is an otter who is a fish fanatic.

Also new to Animal Crossing is Daisy Mae, who is a stalk marketer.  She is the granddaughter of Joan, the person that sold you turnips in previous games.  You can buy turnips from her then sell them for a whole lot of bells! The term “Stalk Market” is a play on words, “Stock” and “Stalk” sound similar.  This is a real way to get a lot of bells, really quickly.  Just check your prices in the morning and afternoon at the Nook’s Cranny, the island shop.  You can also use calculation websites such as Turnip Calculator or Turnip Prophet: Animal Crossing, which are popular for people attempting to master the Stalk Market.

“I’ve started playing the game 5 days after it’s release, and it is amazing!  I love it and have played almost every day!  It is a little bit of an investment, being $59.99, but for me, it was really worth it!  If you are looking to use days’ worth of time, and you are stuck in quarantine or just bored, I highly recommend this game!”  ⭐⭐⭐⭐⭐/⭐⭐⭐⭐⭐ -Mason Mitchell

Animal Crossing: New Horizons has a bright future with many great upcoming updates. Dataminers are people who go into the game’s code, to look for future updates, and to identify glitches in the games.  According to Nintendolife.com, there will soon be many more updates, such as:

A third museum upgrade
A third Nook’s Cranny update
2 new stand-alone buildings, a museum shop and a museum cafe
Ability to grow vegetables
A seafood section to the Critterpedia

Swimming and diving will be added to retrieve these “creatures”

Animal Crossing: New Horizons will be constantly worked on and added on to for years to come, making it a great investment. Be sure to give it a try and increase your gaming skill set!