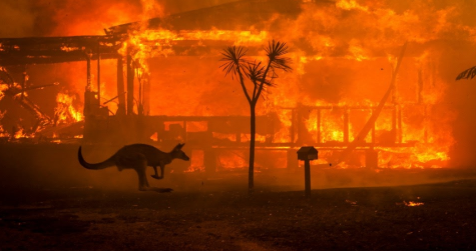 Currently in Australia, a raging fire is spreading through the forest. As it takes down both animals’ homes and citizens’ homes, the fire grows worse and worse. The famous Kangaroo Forest is now nothing but ash, and millions of animals are stuck in Australia as the fires grow closer.

What caused the wildfires?

Back in 2009, a group of scientists were able to predict global warming’s effects and were able to predict that an extreme fire would hit Australia early in 2020. They were able to do this by using the research they collected from graphs of how the climate changed, and how hot and dry it would get. The scientists told the government to do something before the fires started, but unfortunately, appropriate action was not taken before 2020, and this led to the fires devastating all of Australia.  Now, the seasons are dryer compared to any other time, permitting the fires to plow through every forest that Australia has, using it as fuel.

Who are being affected by the wildfires?

As the wildfires go through Australia, millions of houses are burned down. This is leaving people with nowhere to live, and even worse, the fires are moving so quickly, people (and animals) can’t outrun them. Even the birds of Australia, whose nests are also being destroyed, soon won’t be able to fly high enough to dodge the fires. Many animals habitats are being destroyed by the fires, and the inhabitants are forced to flee far from home. Often, they won’t make it because of the pace of the moving fires. So far, 480 million animals have been found dead during the fires.

What you can do to help

Australia’s relief effort is being funded by many sources. Companies are taking the money earned from a certain item, and giving it to the relief efforts. One of the items you can buy is purchase a Koala t-shirt from the World Wildlife Federation. All profits go to saving wildlife in danger from the fires. In addition, you can donate directly to the World Wildlife Federation as well, or directly to the fire departments in Australia here.

All in all, these fires are destructive and heartbreaking. Australia needs our help! What will you do to help these people and animals who are affected?