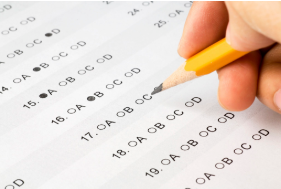 The NJSLA test is FINALLY over! Days and days of boring testing. Throughout the year, teachers have been preparing us for the skills required for these big tests with lots of classwork, homework, and quizzes. Those few days can be a very stressful time, but it’s all over – until next year. Kids in other countries also take standardized tests like these. How do these scores compare to the United States?

On a world-wide scale, the test scores of the U.S. are not great compared to other countries. Our country has some of the top scores, but certainly not the best. An article by the Washington Post said that, in 2011, Singapore had the best test scores in math and science, and Hong Kong had the best score in reading. How does the U.S. compare? We did the fifth best in reading, and tenth for science and math. Still good scores, but not the best.

This year, TIME published a chart with test scores around the world. According to this chart, the United States placed about average, right in the middle of all the other countries. Not great, but not bad either. Shanghai did the best, with a maximum score of 600 for math, and a reading score of 556, almost perfect scores all around. Unfortunately, Columbia and Brazil did the worst, with both reading and math scores less than 400. And the US was right there in the middle, with a reading score of 500 and a math score of 487. Not bad!

Finally, what does testing look like around the world? Not all countries do standardized tests the same way we do it in the United States. In Finland, they have one big test, similar to the NJSLA. But, according to an article by NPR, their test “involves roughly a half-dozen, daylong exams — so that one exam can mean some 40 hours of testing.” While here, we associate the NJSLA with interminable testing, at least we don’t have to take one test that takes up the entirety of multiple days. In Japan, one test can mean the difference between getting into high school or not getting further education. Lots of pressure! Similarly, in England, one test can determine whether you get to finish high school. If you pass, congratulations! You get to finish the remaining two years of high school. If you don’t, you can kiss the rest of your education goodbye.

In conclusion, the rest of the world test very differently than the United States. They place differently (some much better than us, some much worse), and the tests themselves can be very different. So next time you think about standardized testing, just be glad you don’t live in Finland!